You are here: Home > Buckbootz - The New Name for Buckler Boots 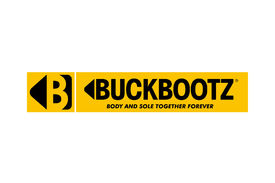 Over the past year you will have seen the increased prominence of our brand name Buckbootz in our logo layout. This was part of a programme to change primary branding on all our products from Buckler Boots to Buckbootz.

Buckbootz had become our most prominent sub brand thanks to its use on our game changing neoprene/rubber EN S5 safety wellingtons which we developed over 2006/7 and introduced to European markets back in 2008.

Buckbootz BBZ6000 safety wellingtons have gone on to become market sector leaders and we now look to a new era when the Buckbootz brand will embrace all of our company’s products. In addition to our Buckbootz neoprene/rubber boots, the Buckbootz brand name is already appearing on leather styles’ branding/labelling/POS and will feature on all our boot boxes as 2020 progresses.

Product codes remain unchanged and product quality, integrity, value, service and innovation remain the drivers of our success. Buckbootz provides a one word, two syllable, alliterative punchy brand name which incorporates the product type and can effectively be projected over all our products in all our markets.

The branding change is being phased in over the remainder of 2020. We want to get your thoughts on the change so please email us at info@bucklerboots.com to register your view.