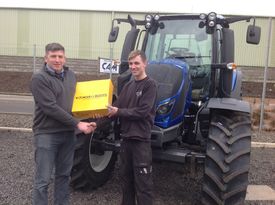 Mr Nelson who farms beef and sheep near Castle Douglas had a close shave with an angle grinder which he says has made him think more carefully about the safest way to carry out a job.

“I have been using angle grinders for years without incident and last October I was doing some repairs to a trailer which involved some cutting at head height, something I had done many times. However, this was a five minute job that turned into something major.

“The grinder kicked back hitting me on the chin and knocking me to the ground. I stood up thinking that was all until my father told me I had cut my throat. I ended up having two days in hospital and two weeks off. I now have a ten centimetre cut across my neck and a new outlook on life.”

Mr Nelson said while had always been conscious of flying sparks and the need to wear protective clothing he had never really thought about the grinder kickingback.

He now makes sure he tries to position himself in a way as to avoid kickback when working.

He said friends and neighbours who have heard about his accident have also had a rethink about their approach to safety which is why he has shared his story.

“It is a tool which people are perhaps a bit complacent about as everyone has one and everyone uses one. It is a job I had done a million times and never had a problem. I’d encourage people to make sure staff are aware of the risks and carry out a risk assessment.”