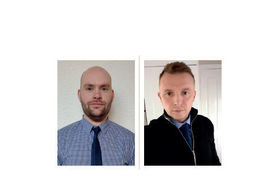 John who joined Buckler Boots Ltd in 2005 and has successfully taken on a number of key roles with the company over that 15 years period, is appointed Commercial and Operations Director with effect from 1st February.

John is known to many of our dealers’ personnel who, I’m sure, will join us in congratulating him on his well deserved elevation to an executive role with the company. In addition to his work in connection with our UK and Ireland business, John plays a key part in the everyday interaction between Buckler Boots Ltd and its subsidiary company Buckler Boots BV based in Holland.

Alan joined the company in 2018 when he took up the position of Sales Manager, Scotland and Northern Ireland, a role he will continue to fulfil in conjunction with his new role.

Alan has brought fresh dimensions to the crucial link between our company and its dealer network with outstanding results and has already been involved with UK national events where he has met many representatives from our nationwide dealer network.

These appointments bring further strength to our senior management team at a time when the company embarks on its Buckbootz branding change and is poised to raise its profile and its market impact significantly.