You are here: Home > British feet get two sizes bigger in 40 years 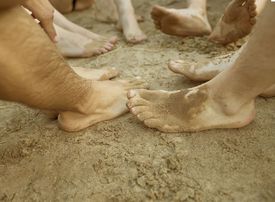 British feet are getting longer and wider, experts have said. During the past four decades, the average British foot has increased by two shoe sizes, The College of Podiatry said. In 1970, men’s feet were on average size eight and women had size four feet, but now the average male wears a size 10 and the average female wears a size six, a spokeswoman said.

The increase could be linked to the population’s increased weight and height, she added. A new poll conducted by the college found that two-thirds of women claim their feet have got wider in adult life and 35 per cent said they have got bigger.

And the survey of 2,000 British adults found that 48 per cent of men said their feet have got bigger, and 61 per cent said their feet are wider. The college also cautioned that many people risk foot problems by trying to squeeze their feet into shoes that are too small.

The full article can be read here.