You are here: Home > Watch your step 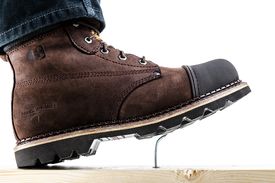 ...to ensure that your customers are safe wherever they step. To that old caution we could add another: OUT OF SIGHT, OUT OF MIND.

We cannot be the only safety footwear brand bemused and concerned that in 2019 there are still considerable quantities of safety boots being sold through bricks and clicks channels to users in the construction, tools and agriculture sectors which are not fitted with anti-penetration midsoles.

It’s not illegal but in this day and age, its not clever either. Just in case you drop your guard and don’t pick up on this low spec, always remember to check the EN label inside the boots.

Look out for the rating “SB” without having “P” alongside. These [SB] boots do not have protection that will stop a nail going right up into the wearer’s foot.

Boots with labels showing S1P, S3 or S5 come with anti-penetration midsoles as part of the spec. “SB” denotes safety toe cap only.

Safety signage at construction sites actually shows that toe AND sole protection are required but would the site operator (or farmer for that matter) know that boots without sole protection were on site?

Eighteen years ago, Buckler Boots launched the UK’s first full range of safety footwear fitted with anti-penetration midsoles using HARD AS NAILS® sub branding to promote the concept. Within a short period of time every safety footwear style in our range incorporated this feature.

In 2001 Buckler Boots introduced the UK’s first Goodyear welted collection of safety boot styles for the construction industry to be fitted with steel anti-penetration midsoles in combination with safety toecaps.