You are here: Home > BuckzViz 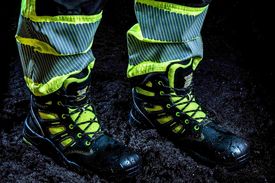 Every successful business has watershed developments which can define its perception in the eyes of its customers, end users and even its competitors.

Such an event took place in 2008 when Buckler Boots launched Buckbootz, Europe’s first ever neoprene/rubber S5 safety boot, which blew the notion that safety wellies were, by definition sometimes cold, sometimes sweaty, uncomfortable and unattractive right out of the window.
“BBZ” and “Buckbootz” have gone on to become almost generic references for this type of safety footwear and now in 2019 - the Buckz Viz range of high visibility leather and Cordura® safety boots is set to repeat that success story.

Like a number of Buckler Boots products, all three Buckz Viz styles come with invaluable design protection to deter would be mimickers thus providing Buckler Boots dealers with an outstanding opportunity to exploit the very significant market portion which Buckz Viz has created.

Available in EN safety yellow and orange Cordura® which, when combined with reflective piping, gives a visual impact rarely if ever seen in safety footwear before.